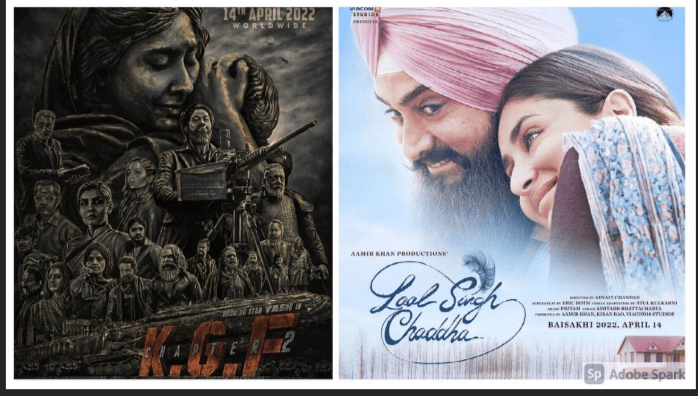 A Story by Jasmine Kaur

Aamir Khan’s film “Laal Singh Chaddha” is delayed for several reasons, including the Covid-19 pandemic. It is an official remake of the Oscar-winning film ‘Forrest Gump’. The directors, however, have decided to release the film on April 14, 2022. As a result, the new release date conflicts with the highly anticipated film “KGF: Chapter 2”, starring Yash and Sanjay Dutt.

Regarding the delay, Aamir Khan explained that it was the VFX of the film that was taking time, “There are two ways to do the visual effects – you can rush or you can do quality work.”. I didn’t want a rush job, so I decided to postpone the film.” Continuing, the actor stated that it was only after the lockdown in March 2020 that it became clear visual effects work would be delayed. Furthermore, there were also parts of the film that were yet to be shot. Khan decided to push the release date to Christmas 2021 for these reasons. Aamir claims that after the second lockdown, with VFX still a long way from being complete, he sat down with his team to define more realistic deadlines. It is interesting to note that the team responded that they would be done by Aamir’s birthday, March 14. After a month of nailing the nitty-gritty and promoting the film, Aamir and the team selected April 14 as the final release date.

Moreover, he added that he will promote KGF 2 along with his upcoming film Laal Singh Chaddha. “I also spoke with Yash and I was touched by the gesture of the KGF team. KGF: Chapter 2 will also be promoted and informed to the makers. I’m a fan of the KGF franchise and will see KGF: Chapter 2 in theaters on April 14th,” said Aamir Khan.

Referring to the clash with Sanjay Dutt’s film ‘KGF: Chapter 2’, the actor said, “I hate to seem like I’m encroaching on someone else’s territory, but like playing a Sikh character for the first time in my career, Baisakhi day (April 14) seemed to be the most suitable for the release of Laal Singh Chaddha.

“Before finalizing the date, I apologized profusely to the producer (Vijay Kiragandur), director (Prashanth Neel), and lead man (Yash) of KGF Chapter 2. I wrote to them and explained my situation to them. I explained to them how the confinement had made it difficult for all the producers. I also explained that a Baisakhi release for my film would be ideal. They understood my point of view and were kind enough to ask me to continue despite the release of their film the same day. I was very touched by their gesture. In fact, I had a long, open-hearted conversation with Yash who was very supportive of my plan, “he concludes.

Laal Singh Chaddha is an upcoming Indian comedy-drama film directed by Advait Chandan from a screenplay written by Eric Roth and Atul Kulkarni. The film is produced by Aamir Khan Productions, Viacom18 Studios, and Paramount Pictures. An adaptation of the 1994 American film Forrest Gump which itself based on Winston Groom’s 1986 novel of the same name, the film stars Aamir Khan as the titular character along with Kareena Kapoor, Naga Chaitanya (in his Hindi film debut).

The film’s music is composed by Pritam, in his third collaboration with Aamir Khan after Dhoom 3 (2013) and Dangal (2016), and lyrics for the songs were written by Amitabh Bhattacharya. The music sitting discussion was held at Khan’s Panchgani House in August 2019, with composer Pritam and lyricist Bhattacharya, working on the film’s music. The title track of Laal Singh Chaddha, which featured in the motion poster,[70] was recorded by Kannan Mohan of the Agnee band in January 2020.

K.G.F: Chapter 2 is an upcoming Indian Kannada-language period drama action film written and directed by Prashanth Neel, and produced by Vijay Kiragandur under the banner Hombale Films. The second installment of the two-part series is a sequel to the 2018 film K.G.F: Chapter 1. The film stars Yash, Sanjay Dutt, Srinidhi Shetty, Raveena Tandon, and Prakash Raj.

Neel retained the technicians from its predecessor with Bhuvan Gowda handling the cinematography and Ravi Basrur scoring the music for the soundtrack and the film’s background. It is the most expensive Kannada film with a budget of ₹100 crores. The film is scheduled for a theatrical release on 14 April 2022 in Kannada along with the dubbed versionsof Telugu, Hindi, Tamil and Malayalam languages.

The Karnataka State Anti-Tobacco Cell sent a notice to actor Yash, producer Vijay Kiragandur and filmmaker Prashanth Neel on 11 January 2021 as the makers failed to display the anti-smoking warning message, particularly in the sequences that involve Yash smoking. As per the law, anti-smoking warnings have to be displayed to stop fans from emulating it.

SHEFALI SHAH REVEALS SHE SAID NO TO PROJECTS AFTER PLAYING AKSHAY KUMAR’S MOM AT 28: ‘EVEN IF IT MEANT SITTING AT HOME’