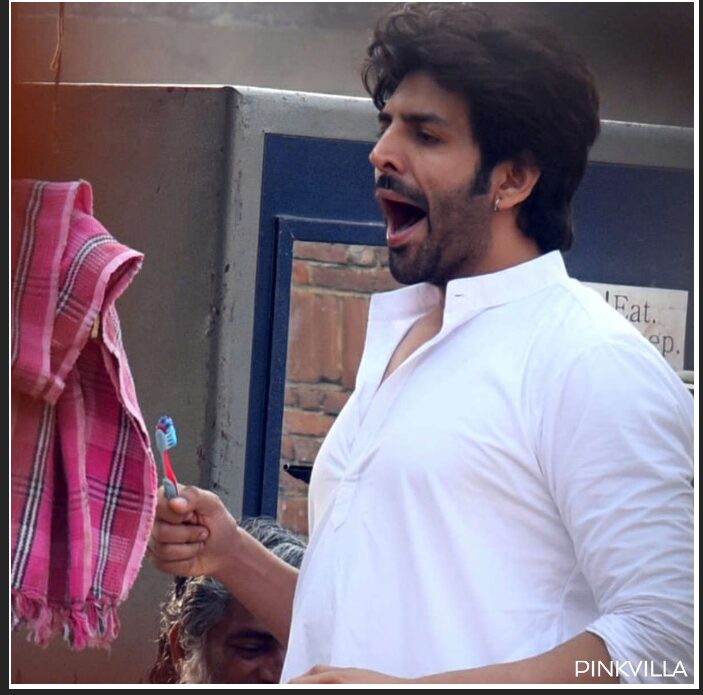 A Story by Jasmine Kaur

Kartik Aaryan is surely one of the busiest actors in Bollywood currently. His films announcements are coming back-to-back and so are his shooting schedules. Well, to note Recently, the digital platform for Mrunal Thakur’s film ‘Dhamaka’ was released. Fans have responded positively to the film. Its trailer has also been well received. Now, there’s a report that he has jetted off to New Delhi for the shooting of his upcoming film Shehzada.

He was seen shooting for Shehzada in the national capital today. Kartik was seen in character wearing a white kurta with kajal applied to his eyes. He held a toothbrush and was yawning. He appears to have a beard in the film. The actor announced the release date of the film will be November 4th, 2022. Rohit Dhawan is directing the film. Kartik and Kriti are reuniting for the second time after Luka Chuppi.

Using his official Instagram handle, Kartik shared a picture from Jama Masjid and wrote, “Shehzada in Dilli.” In the photo, he can be seen wearing a jacket.

This movie is a remake of the Telugu movie Ala Vaikunthapurramuloo. Paresh Rawal, Manisha Koirala, Ronit Roy, and Sachin Khedekar have also appeared in the film. Shehzada, an action-packed musical family-friendly movie, will be filmed in Mumbai and Delhi over the next few months.

Kartik Aaryan surprised the fans. Kriti Sanon will also star in his next movie, Shehzada. The actor also announced the release date of the movie. Rohit Dhawan directs the film. Now, the actor recently completed two films, Freddy and BhoolBhulaiyaa. Note that Kartik and Kriti will meet for the second time after Luka Chuppi. The movie was a hit and fans loved it.

Taking to his official Instagram handle, Kartik wrote, “#Shehzada. Duniya ka SabseGareeb Prince. @Kritisanon.” It is worth mentioning here that the film is a remake of a Telugu movie Ala Vaikunthapurramuloo. It also stars Paresh Rawal, Manisha Koirala, Ronit Roy, Sachin Khedekar. Producer Bhushan Kumar has teamed up with the makers of Shahid Kapoor’s ‘Jersey’ Allu Arvind and Aman Gill to mount this film on a lavish scale. Shehzada’ an action-packed, musical, family film will be shot over various schedules in Mumbai and Delhi in the next several months. Rohit Dhawan is once again collaborating with music director Pritam to bring us fresh foot-tapping numbers.

Creators and cast members have accessed their social media accounts today to unveil the movie logo. This will give you a glimpse and vibe of the film, along with the announcement of the movie’s release date, November 4, 2022.

Kriti Sanon also shared the announcement on Instagram and wrote, “Superly excited to be a part of #Shehzada. In cinemas on 4th November 2022! Directed by #RohitDhawan.

Kartik Aaryan and Kriti Sanon have earlier worked together in the 2019 film Luka Chuppi. They are all ready to reunite with Shehzada. Kartik went to his official Instagram account and shared his photo from a set of Shehzada who has a clapperboard. He turns his back on the camera, so we can’t see his gaze in the movie. Kartik wears a brown shirt and blue jeans. He wrote in the caption: #Shehzada shuru.

Swara Bhasker ready to take on motherhood, says ‘I am now a prospective adoptive parent’!