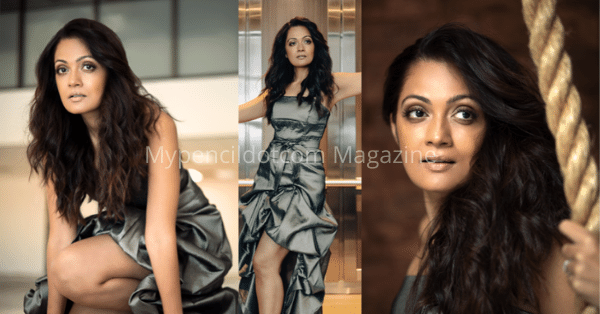 MYPENCILDOTCOM : When did you realize that you could be an actor and how did the journey to films happen for you?

Sheena: I played my first role when I was just one year old – I played a baby in a theatre play, so I started early! All through school I was most interested in theatre and straight after school I did five years of theatre in Delhi – so, it wasn’t so much realising that I could be an actor, but always being one. The journey to film came organically – after so much theatre I started to get offers, but then when I won a crown on Miss Universe India, where I was mentored by Sushmita Sen, I was offered the lead female role in a film playing opposite the South mega star, Mammootty, which I accepted. After that, even though I occasionally still do theatre to keep my acting skills sharp, I’ve stuck with film and more recently web-series.

MYPENCILDOTCOM : “Fame Game” experience, how was your experience working in fame Game?

Sheena: It was interesting being on a Netflix set – having the American influence and corporate organisation merged with India’s style was cool. And of course doing scenes with Madhuri Dixit was incredible – it was interesting how she was playing a super star as well as being a superstar. Actually the role I was nominated for Best Actress at the Shanghai and DUbai Film Festivals was similar – I had to play a super star in that film, so I could understand how she was feeling and I had to create my character to interact with her.

MYPENCILDOTCOM : Was 2021 was promising for you, After fame game , City of dreams happened to you, how was that experience?

Sheena: All my life, passion and work is about creating characters – that;s what I live for – to work in a collaborative way with directors and producers, to bring them ideas and to work on their ideas to bring a character to life. The director of City of Dreams is very creative and modern, so the journalist that I played in that series was a young, bubbly social media journalist, who wants to promote a politician for her work for women’s rights, but ends up discovering a scandal. Actually I am a human rights ambassador myself and I much prefer the new, younger methods of communicating in the media, so I liked creating this character and it was definitely nice to be on Disney HotStar, who I am again working with now on a new series.

MYPENCILDOTCOM : What describes you best as an actor? Tell us about your upcoming projects?

Sheena: I’m driven by character – I’m theatre trained, have been acting for years and have performed on many of the best stages in India like the National Theatre, Prithvi, etc., but in everything I do I strive to bring my director and then audience authenticity. I do a lot of research, first totally understanding the script, then the background to the script, then discussing details with the director and then looking into the world he’s exploring – if I can actually go to the location where it’s based, meet real people like that, then that’s best, but much of the time is spent either online looking at real people to get accents and mannerisms, local details – that type of thing. Then I have to bring this to the director, get their feedback, and then refine it exactly to use the research to create the character they’ve envisioned. Every single step of my path is about the creation of a character.

MYPENCILDOTCOM : How do you see yourself 10 years down the line?

Sheena: Doing what I’m doing now is such a blessing that my only wish is that long may it continue. I just back from a long trip to America where I shot for Taron Lexton’s upcoming film NOMAD, which broke the world-record for most number of countries filmed in, so I hope that, as well as more work in the Hindi Film industry coming my way, that I can work in Hollywood more, and of course with the great work coming from the south, I hope to work there again too. Honestly, the thing that I most hope is that in ten years I will be creating even more layered and colourful characters, and also I hope in my work for human rights that we have managed to get full human rights education as mandatory in all schools across South Asia.

MYPENCILDOTCOM : What is your style mantra? And also Health Mantra?

Sheena: My style mantra is comfortable, confident, and carefree in everything I wear. I think comfortable should be the priority, you can wear anything which you like, feel comfortable and happy. My health mantra is to eat healthy food, exercise, work out and be happy.

MYPENCILDOTCOM : If You were to work with any 5 directors and 5 actors in industry, who would they be in lead role?

MYPENCILDOTCOM : What kind of fan following you have & do you have any craziest fan?

My fans are great – especially on Facebook where I have almost 600,000. They are kind and friendly and respectful and I do personally go there and interact with them and do live chats .. Also, fans are great ways for me to get feedback, and the love you get really brightens up my day.

MYPENCILDOTCOM : How important are awards for an actor? How do you manage winning one and rejections at times?

Sheena: Awards are very important in terms of recognition among directors to get further work and work with a bigger audience. Honestly, just to be nominated is a great acknowledgement because the nominations many times come from major industry professionals. Like when I was nominated for Best Actress at the Dubai Film Festival, the head of the jury was Shekhar Kapoor! But, when I was nominated for the Golden Goblet in Shanghai, the other actresses that were nominated were Hollywood legends – Kiera Knightley and Kate Beckinsale, so really just to have my name up there with them in the same category was wonderful!

Be true to your own goals. Never allow anyone’s criticism, even if they say it in a way they think is helpful, make you doubt yourself. If you have anyone around you who is constantly critical, stop having them around you!

MYPENCILDOTCOM : Tell us about your human rights work and any message you want to give out with it to fans?

I am South Asia Ambassador for humanrights.com, the world’s largest non-governmental human rights education and awareness campaign. I’ve personally reached a hundred and seventy million people with a message of basic rights and equality and was awarded the Hero Award at the United Nations in New York. In Lockdown I created the Born Free & Equal podcast on Hubhopper with Media Director Raindrop Media – we worked with stars like Preety Zinta, Sonakshi Sinha, Raveena Tandon, Sonu Sood, Imtiaz Ali, Tisca Chopra and many more, to spread awareness of basic rights and equality. Our podcast gives out practical information about the Indian Constitution and United Nations Universal Declaration of Human Rights, focusing on the issues of today, how these rights affect our daily lives, and providing motivational stories by the celebrities about how they have used and helped to support these rights. You can check it out by Googling “HubHopper Born Free and Equal”. https://instagram.com/bornfree_equal?igshid=YmMyMTA2M2Y=